Credited to SenorDeeebs and #bluesun#4182 on ACPC subreddit discord!

-Implementation of Gardening system.
-Addition of garden plot to campsite, to the left of the camper.
-Lloyd and flower trade implementation

Check the link here for guides on gardening!

Animal Crossing: Pocket Camp now features an integrated screenshot function. The upper right sidebar will have a camera icon which can be tapped to make a screenshot.

-When you enter camp, animal friends that want to talk to you will be shown in a thought cloud above your character.
-Only the animal friends shown in that notification can be talked to for items and friendship points.
-Items gained from talking to animal friends in the campsite have been increased to offset the lower number of animals you can talk to.

For players affected by the holiday event issue from 11/30/2017 at 14:00 to 12/4/2017 at 13:10 where holiday challenges were not designated completed even when the conditions were fulfilled, the issue has been fixed and compensation items have been sent.

Friend Frenzy event limited timed goals went live on december 10, 2017. There are 3 goals, each one requiring you to add an increasing number of other players to your friends list than before from 1 to 10 to 20. Luckily, the counter for each goal is dependent on your current number of friends. So if you already have the necessary number of friends then the corresponding goal and any lower goal is automatically cleared. You can gain 10, 20 and 30 Leaf Tickets respectively per goal.

In game notifications specifically mentioned the gardening mechanic along with the promotion of adding friends to your list. Whether this is only thematic or not remains to be seen but it seems to suggest asking friends for help might be a mechanic of gardening much like with Shovel strike Quarry.

Clothes will soon be craftable. Update will possibly release alongside the gardening update. Clothes Crafting is implied to be handled by the Able Sisters instead of Cyrus.

Additional info will be added as news comes in.

Who is the upcoming new animal? [Dec 11]

New location has been announced! [Dec 9] 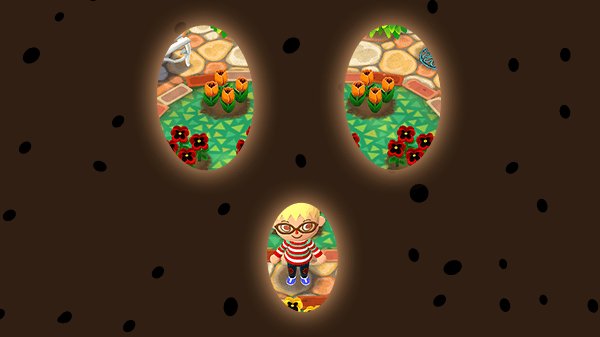 Today on their Twitter page, Animal Crossing Pocket Camp just sent out a tweet hinting at a new location for our camper friends. The tweet shows a photo of a new location with some flowers of varying colors and types through the perception of Shovelstrike Quarry host, Lloyd.

“A new place at the camp grounds? I hear it’s getting ready. Something like a flower blooms..? Wait for the next report, please.”

It appears to be that players may be able to decorate and express themselves further through one of Animal Crossing’s features, the Flower Garden.

Here are some leaked infos which were shared by SenorDeeebs and #bluesun#4182 on ACPC subreddit discord.

teakettle666
are there spiders? or only in the New Horizons?
Reply

Athena_Fun
Thanks to this I found my birthday aminal thank you so much creators love you.Pls post a chapter about Ellie.
Reply

Redfox007
That hot air balloon is so lit! i want one!
Reply

Shovel 1
How do I get a shovel
Pool Set 3
So I’ve had the pool amenity for a while now and accidentally put it away and now I can&rsq...
Christmas event 7
how do you collect the candy canes? do you get them from helping friends?
Villagers/Animals 4
Put ‘clay’ in the chat for him in acpc
> Go to the latest comments

Where do you find the Friend Powder once you get it?
Official Release date?
BeBeRouge
What benefits can you get from the camper?
Can I recover my save file if I accidentally uninstall the game?
Will there be daily bonus or present in the game?
Can I use QR code in the game?
What will be the price range for in-app purchases?
> See All